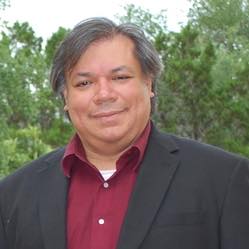 John A. Lopez is a native of San Antonio and graduated from Thomas Edison High School in 1984. He then attended Southwest Texas State University where he received his undergraduate and graduate degrees in music. After graduating, he started working as a part time faculty member at SWT. In 2003 Professor Lopez became a tenured Associate-Professor as well as the founder and coordinator of the Latin Music Studies area. Under his direction, the Mariachi program flourished at Texas State. As an ensemble, starting with the first-place win in 2006, Mariachi Nueva Generacion has received first-place for a record setting 9 times at the Mariachi Vargas Extravaganza. Professor Lopez also led the expansion of faculty and curriculum in mariachi in higher education. Along with colleagues Professor Michelle Quintero and Maestro Miguel Guzman, Mr. Lopez created courses in Mariachi teaching techniques that serve as the core to the Minor in Mariachi and the newly created Major in Mariachi Education. The curricular offerings at Texas State University are groundbreaking and serve as a model for higher education institutions across the country.