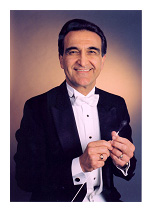 Mr. Maiello’s academic experience includes extensive teaching in the public schools. He served as Professor of Music and Chairman of Performance at the Crane School of Music, Potsdam College of SUNY, Potsdam, New York, where his duties included advanced instrumental conducting, applied clarinet, woodwind and percussion techniques; and conductor of the Crane Wind Ensemble. Under his direction, the ensembles at Crane and George Mason University have commissioned many new works, made numerous recordings and appearances statewide and at regional and national conferences in the United States and Canada. He is the author of CONDUCTING: A HANDS-ON-APPROACH, CONDUCTING NUANCES: LITTLE THINGS MEAN A LOT, and co-author of the 21st CENTURY BAND METHOD.

Anthony Maiello travels widely presenting clinics, lectures and workshops, and guest conducting and adjudicating numerous music festivals. He is presently Professor of Music and Director of Instrumental Studies at George Mason University, Fairfax, Virginia where he conducts the Symphony Orchestra and Wind Symphony and teaches several conducting courses. Professor Maiello was awarded the title of “University Professor” by the Board of Visitors, the highest rank given to faculty members at George Mason University. Mr. Maiello has also served as Associate Conductor of The McLean Orchestra, McLean, Virginia, and has been appointed an Honorary Conductor of The United States Navy Band, Washington, D.C. and is presently the conductor of the American Festival Philharmonic Orchestra, and the American Wind Symphony, Washington, D.C.